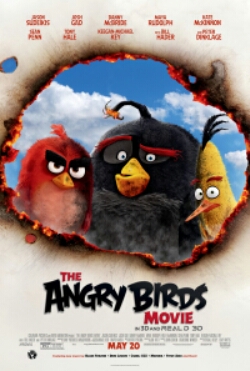 Based on the Angry Birds video game series first released in 2009 game and downloaded over 3 billion times, The Angry Birds Movie is a fairly typical animated kids’ movie that attempts to entertain accompanying adults. It follows the adventures of Red voiced by Jason Sudeikis who keeps to himself until he is forced to take an anger management class. After befriending fast-talking Chuck voiced by Josh God and explosive Bomb voiced by Danny McBride, Red discovers a mysterious plot from a group of newly arrived green pigs. Eventually, the whole community of naive birds team up to defeat the mischievous pigs pretending to be friendly. The film is filled with the requisite bird and pig puns, such as a Birds and Bees Fertility Clinic, free-rage chicken, Instaham, and Hamnesty International. Since it is based on the video game, there are many references to actual gameplay that would be familiar to all players. For instance, each bird has a corresponding skill and many birds are launched from a slingshot to destroy the green pigs. Although it will surely entertain young children, the film’s premise feels half-hatched and probably would be better suited as a short film similar to the ones played before Pixar movies. It will no doubt be a commercial success with many sequels to come but hopefully the future films will harness the creativity and heart of Pixar and Disney.