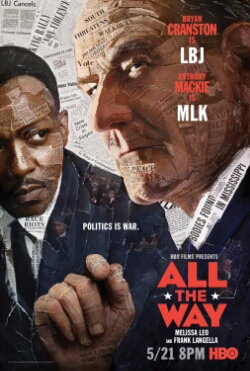 Based on the Tony Award-winning play, All The Way is a phenomenal HBO movie about LBJ in his first year as president following JFK’s assassination in 1963. It is a first-rate political drama drawing the curtains on the inner workings of LBJ’s determination to pass the Civil Rights Act of 1964. LBJ is brilliantly portrayed by Bryan Cranston who won the Tony Award for his performance in the theatrical version. It is exhilarating to watch Cranston as he uncannily transforms into LBJ, complete with his physical appearance, mannerisms, and sharp wit. He is effectively able to show the nuances of LBJ, a complex larger-than-life character with deep convictions about making America a better place. The film chronicles LBJ’s deft political acumen to enact legislation through sometimes controversial tactics and compromise with his political enemies. In order to achieve his ends, LBJ was also forced to confront his political allies, including MLK and the Dixiecrats, even at the risk of hurting his chances in the 1964 presidential election. Although depicted in a largely positive light, the movie touches on his ultimately disastrous decision to escalate the Vietnam War. LBJ is also vividly shown as a regular man with a folksy, often profane wit and humor. He comes across as a simple Texas country boy from humble beginnings who truly wants to make a difference. Besides Cranston’s skillful performance, the film has a star-studded cast, including Anthony Mackie as MLK, Bradley Whitford as Hubert Humphrey, Frank Langella as Senator Dick Russell, and Melissa Leo as Lady Bird Johnson. Overall, the movie is a must-see for its terrific performances, especially Bryan Cranston, and its well-crafted portrayal of a politician during a time when compromise was not a dirty word. It is an refreshing look into how politics should work unlike today with the Congressional gridlock and the rise of political demagoguery.