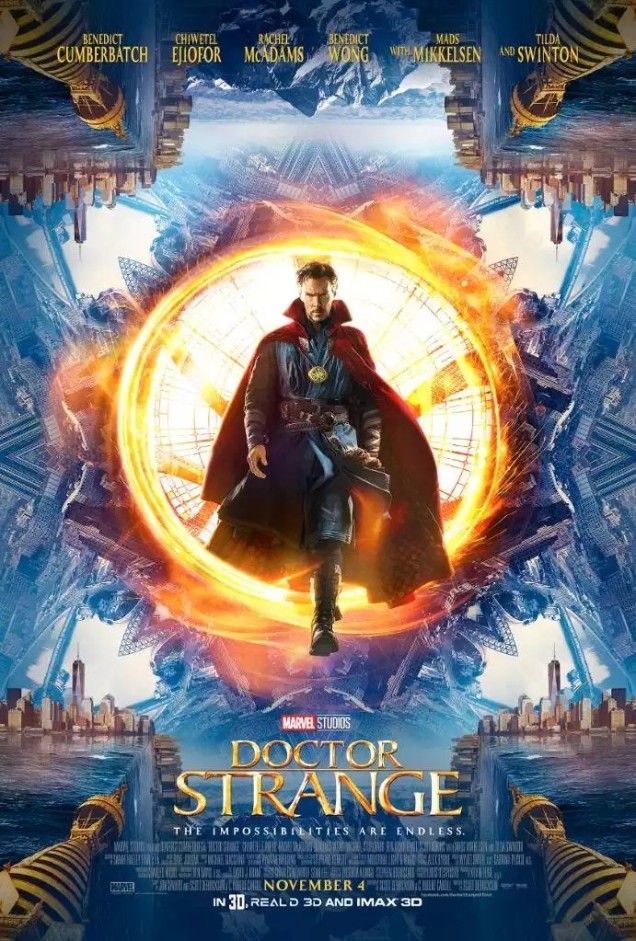 Yet another comic book-based installment in the seemingly endless Marvel Cinematic Universe, Doctor Strange is a entertaining film that takes a refreshingly new approach to the superhero genre by telling a rather peculiar story in a visually stunning fashion. The movie starts out as a typical comic book origin story in which the audience is shown how the protagonist originally attains his superpowers. We first meet the brilliant yet arrogant neurosurgeon Dr. Stephen Strange who goes along with his normal life until a fateful accident. Played by the talented British actor Benedict Cumberbatch, Doctor Strange becomes desperate after losing most function in his hands so vital to being a surgeon and sacrifices practically everything in order to find a medical solution. Nowhere else to turn, he ends up in Kathmandu, Nepal where he meets a mystical teacher known as the Ancient One who says he can be healed through the spiritual realm. He is taught ways to tap into his mind to unleash hidden supernatural powers by reading ancient texts and being mentored by the Ancient One, portrayed by the otherworldly looking Tilda Swinton, and her followers. Eventually, he is thrust into protecting Earth from a mysteriously malevolent dark power. He must help battle a devotee of this evil force who used to be a disciple of the Ancient One, a character played by the brilliantly creepy Mads Mikkelsen. As a novice sorcerer endowed with mystical powers, Doctor Strange finds himself in mind-bending fight sequences that defy the laws of physics. The filmmaker does a terrific job of creating visually arresting scenes that feel straight from M.C. Escher, where any sense of up or down is jumbled together. With its deeply spiritual undercurrent and heavy use of spectacular visual effects, the movie very much reminded me of Christopher Nolan’s 2010 film Inception. As a result of its unusual qualities, it is a radical departure from any other Marvel adaptation, which tend to be formulaic and more of the same. However, there are a few hallmarks of the more traditional Marvel movie: it includes a crossover of characters from the rest of the Marvel Cinematic Universe and the characters crack self-aware jokes. Overall, I found the film to be thoroughly enjoyable and filled with enough creativity for it to stand out from what has been expected in the innumerable superhero movies. There is no doubt that this will not be the last time we see Doctor Strange as the character’s strange storyline is ripe for a very lucrative movie franchise.