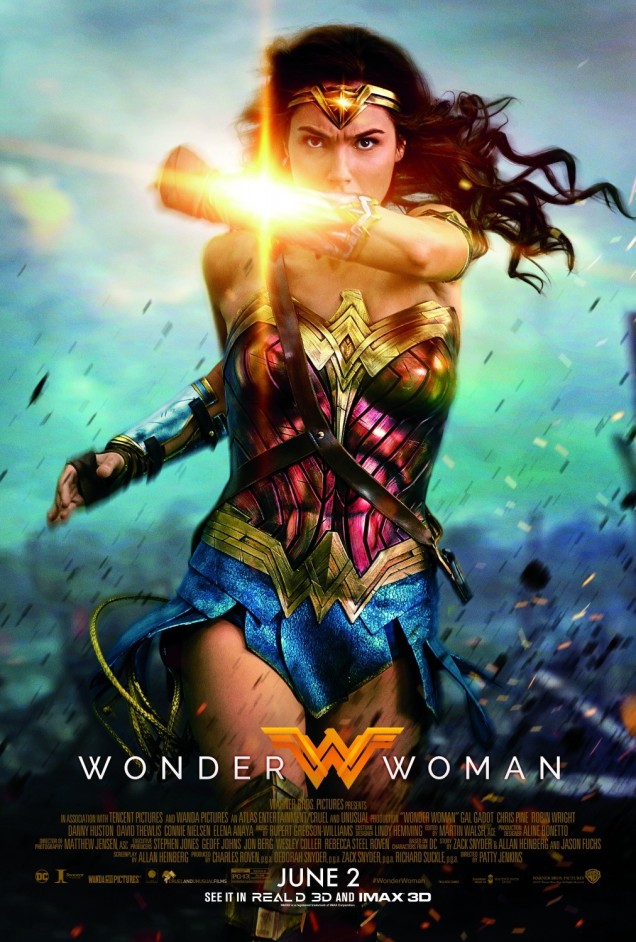 Directed by the first female director of a superhero film with a female protagonist, Wonder Woman is one of the better comic book superhero movies that I have seen because it effectively blends action, humor, and drama, all underscored by a unique feminist approach. We first meet Diana, later known as Wonder Woman and played by the beautiful and strong Israeli actress Gal Gadot, as she grows up on the mystical island of Themyscira, which is home to the female warriors the Amazons, and begs her mother Queen Hippolyta to train as an Amazonian warrior. Her aunt General Antiope considered the greatest fighter, played by Robin Wright, secretly trains Diana to become one of the best warriors on the island. Throughout the first part of the film, we learn the back story based on ancient Greek mythology of the Amazons: they are a group of strong females created by Zeus to protect humanity against Ares, the god of war who murdered all of the gods except Zeus, and his corrupting influence on mankind to engage in war. Suddenly Diana’s idyllic life changes after she rescues Steve Trevor, played by the charismatic Chris Pine, who is an American pilot spying for the British whose airplane crashes off the coast of Themyscira. Eventually, Diana travels with Steve to help bring World War I to a peaceful end and prevent the use of a new deadly chemical weapon developed by the evil female scientist Doctor Maru, also known as Doctor Poison, under the guidance of the equally villainous German General Erich Ludendorff, played by Danny Huston. When Diana first arrives in London, the movie becomes more of a funny fish out of water story as she tries to understand feminine fashion and that she cannot carry a sword and shield out in public. Eventually, Diana and Steve along with Steve’s hodgepodge team, including Sameer the North African spy, Charlie the drunk Scottish marksman, and Chief the Native American smuggler, make their way to the Western front in Belgium in hopes of discovering Ludendorff’s weapons factory. In an unusual twist for the superhero genre, Diana is the one with super-strength and superhero powers who helps the male protagonists complete their mission and kill most of the bad guys. At times, Steve and other men are shocked and somewhat embarrassed when they see Diana outmaneuver and outfight them. The film ends with Diana facing an unlikely enemy and losing a newly loved one, but, otherwise, she successfully completes her mission to save human lives. Overall, I found the movie to lend a greatly refreshing take on the wildly successful yet male-dominated superhero genre by creating a strong-willed feminist superhero who can take down the bad guys herself without male intervention. The filmmaker is able to avoid the pitfalls of many recent DC Comics movies and craft a greatly entertaining action hero film, complete with realistic World War I settings and explosive CGI effects while subtly relaying a message of female empowerment and equality for Hollywood and beyond.