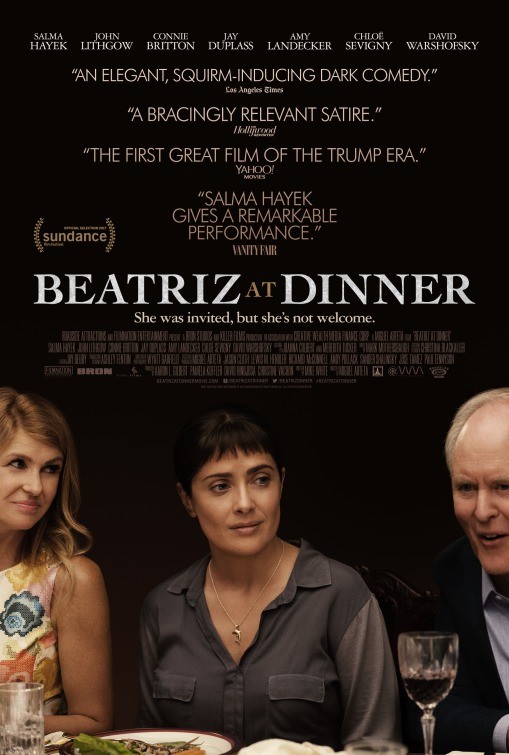 A particularly relevant story during such a time of political divisiveness, Beatriz at Dinner is an incisive dark comedy with important social commentary about social class and income inequality problems facing contemporary America. Played by the Mexican actress Salma Hayek in a terrific performance, Beatriz is a humble and kind-hearted Mexican immigrant who works as a holistic healer and masseuse for cancer patients and wealthy clients like the characters Cathy and Grant. After a session with Cathy at her and her husband Grant’s palatial mansion in upscale Orange County, Beatriz’s car breaks down and Cathy offers her to stay for a dinner party while she waits for her ride. Eventually, two other couples whose husbands have business interests with Grant arrive and practically ignore Beatriz’s presence, which leaves her in a very awkward position. However, she becomes vocally appalled by one of the guests, Doug Strutt who is played brilliantly by John Lithgow and is an extremely wealthy real estate tycoon with questionable legal and ethical practices. After learning more about what he actually does, Beatriz, who comes from a poor Mexican Village and exudes positivity, argues with Doug and berates him for his smug contempt and sheer meanness in his misguided pursuit of wealth at all costs. She is particularly disgusted by his showing off to the dinner guests of hunting a large animal on a recent African safari. You also get the sense that the hosts and the rest of the guests are out-of-touch with the real world because they talk about petty things and the accumulation of wealth rather than expressing sincere personal emotion and passion for taking care of others like Beatriz. The film in the form of Doug’s character eerily reminds the viewer of Donald Trump who, like Doug, is a brash real estate billionaire on his third wife. Overall, I found it to be a remarkable movie that touches on so many of today’s important societal issues in a fascinating fashion by recreating a supposedly simple dinner party through the eyes of an “outsider.”