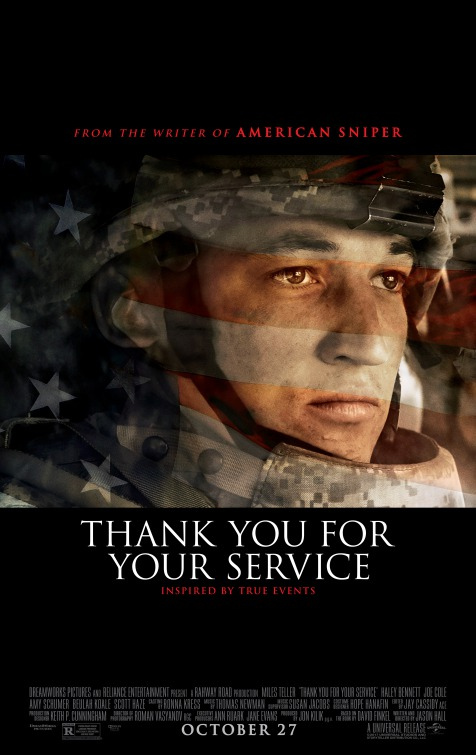 Directed by Jason Hall who is the Academy Award-nominated screenwriter of 2014’s American Sniper, Thank You For Your Service is a powerful film that takes a raw unflinching into the life of soldiers suffering from post-traumatic stress disorder after being deployed and its effects on their lives back home. Based on true life stories, the movie follows three recently deployed soldiers in Iraq who have returned home but with horrific emotional scars. The main character Staff Sergeant Adam Schumann, played terrifically by Miles Teller, tries to be the good soldier and hide his emotional distress from his loving wife, played by Haley Bennett, and their two young kids. Although broken himself, he becomes the core emotional support for two other soldiers from the same unit who are suffering much more visibly. American Samoa-born Specialist Tausolo Aieti, played by Beulah Koale, has a particularly challenging time acclimating to civilian life and the news that his wife is pregnant with their first child. He suffered traumatic brain injury after withstanding several bomb blasts while on tour in Iraq. Along with Schumann, he tries to get help from the VA but discovers that receiving medical attention is a much more complicated and lengthy process due to the backlog and bureaucracy of the VA. They are particularly desperate to receive help after helplessly witnessing the rapid downward spiral of the other soldier that returned home with them, Billy Waller, played by Joe Cole. His tragic mental breakdown is accelerated after learning that his fiance has left him when he was deployed. As he tries to alleviate the other soldiers’ suffering, Schumann must grapple with his nightmarish flashbacks and guilt over possibly causing additional harm to a soldier with a grave head injury after an accident while trying to save his life. Eventually, Schumann realizes he also must face his own mental health issues caused by PTSD since his marriage is strained and his depression could lead to suicidal thoughts. Unlike most other movies dealing with war, the film is effectively able to focus on the often overlooked and stigmatized effects that war has on soldiers, especially debilitating mental health problems and PTSD. Yes, it is heartbreakingly depressing watching the movie but, I feel, that everyone should see it as it relays such an important message about soldiers and veterans. It vividly reveals how many of them are suffering without insufficient help from the overburdened and underfunded VA. The filmmaker puts faces to the truly shocking statistics about the increasingly large number of soldiers and veterans suffering from mental health illnesses and committing suicide. Overall, I found it to be a highly evocative movie that is sometimes depressing and anger-inducing about such an important issue as PTSD and whose stories are brought to life as a result of the brilliant acting performances.