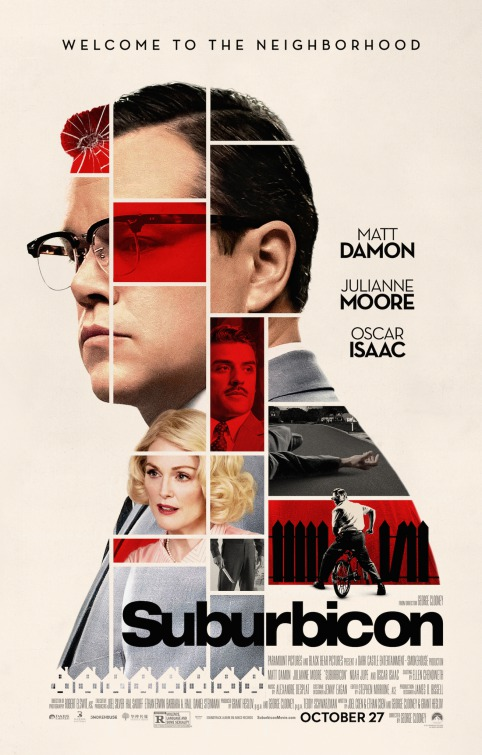 Directed by George Clooney, Suburbicon is a strange movie mixing satire, murder mystery, and racial social commentary that ultimately fails its great potential with such a stellar cast of actors and famous writers and director. Going into the movie, I was fully prepared for a zany and eccentric experience since it is partly written by Joel and Ethan Coen, both highly-skilled writers and filmmakers known for oddball humor and satire. The movie starts like a stereotypical vintage infomercial for a bizarrely exaggerated picturesque and quiet suburban community with a 1950s-sounding narrator and imagery associated with that era. I was almost immediately reminded of the 1998 movie Pleasantville, which effectively captured the 1950s and was mostly shot in black-and-white. We first meet the protagonist Gardner Lodge, played by Matt Damon, who appears to be a gentle and normal middle class suburban father and husband in the relatively new predominantly white town of Suburbicon. Coinciding with the first African-American family moving into the community, much to the consternation of the white neighbors, Gardner, his wife Rose, played by Julianne Moore, their young son Nicky, and Rose’s twin sister Margaret, also played by Julianne Moore, are robbed by two mysterious strangers. Rose who is bound to a wheelchair after a recent car accident is subsequently killed during the robbery. Gardner, in a peculiar calm fashion, tries to return to a life of normalcy and asks Margaret to stay and help with raising Nicky. Reinforcing that not all is well in the seemingly perfect Suburbicon, the residents’ hatred and problems arise as their discomfort with the black family becomes a race riot. With such chaos surrounding them, suspicions about the robbery and Rose’s death are raised by the police and the life insurance company Gardner is trying to collect from his wife’s death. To make matters worse, a slick insurance agent named Bud Cooper, played by Oscar Isaac, arrives at the Lodge residence aggressively investigating the life insurance claim and if the death of Rose was orchestrated to defraud the insurance company for money. Chaos rapidly engulfs this supposedly idyllic town where everybody gets along, and the increasingly violent acts expose the hypocrisy and true nature of the residents, especially Gardner and Margaret. Unexpectedly, the movie becomes predominately a murder mystery almost immediately after the satirical opening act and does not have as much dark comedy as the promotional material would have you believe. Overall, I thought that the film tries too hard to blend several genres together to provide biting social commentary, and, unfortunately, fails to capitalize on the terrific talent involved and thereby becomes a wholly different movie than expected.