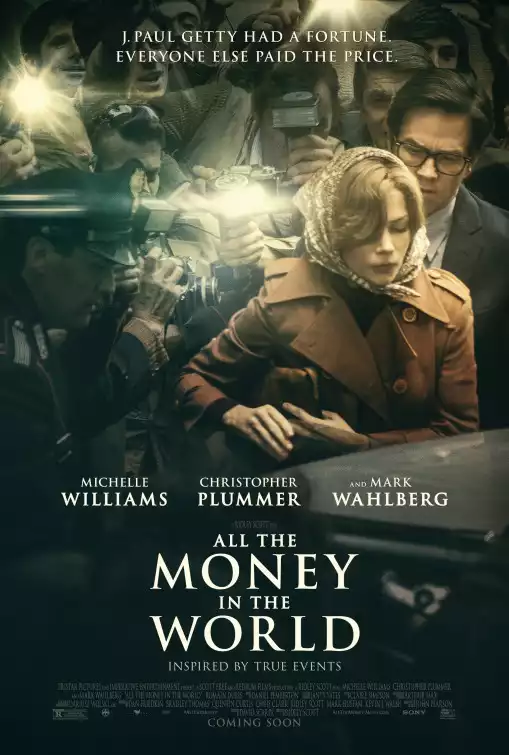 Directed by Oscar-nominated filmmaker Ridley Scott who is best known for 1979’s Alien, 1982’s Blade Runner, 2000’s Gladiator, and 2015’s The Martian, All the Money in the World is a well-crafted and gripping thriller about the kidnapping of a grandson of one of the world’s wealthiest men in the 20th century. The story takes place in 1973 when the 16-year-old grandson of billionaire oil businessman J. Paul Getty, terrifically played by Academy Award winner Christopher Plummer who replaced the disgraced Kevin Spacey only one month before release, is taken hostage by an Italian criminal organization in Rome. They ask for a ransom of $17 million for the life of J. P. “Paul” Getty III, played by Charlie Plummer, from his mother Gail Harris, played by the brilliant Academy Award nominee Michelle Williams, who is now divorced from Getty’s troubled son. Without a financial settlement from the divorce and without help from her former father-in-law, she is distraught because she does not have the money to save her son’s life. As a result, she has no other recourse but to ask Getty who she greatly despises to help pay the ransom, but he refuses as a ruthless tactic to avoid having his other grandchildren being kidnapped and costing him money. The movie portrays Getty as a vicious tycoon who will do anything to keep his money even though he is worth over a billion dollars. To avoid paying a single penny, he eventually enlists a former CIA operative and negotiator for Getty Oil named Fletcher Chase, played by Mark Wahlberg, to figure out a way to free Paul from his captors. Chase is also told to remain in contact with Gail about the kidnapping and report everything back to Getty. The best moments of the film show Getty making rather brutal comments about his family and apparent lack of interest in helping his grandson and much hated former daughter-in-law even while he continues to spend millions of dollars on his art collection. To further illustrate the cruelty of Getty, the story dramatically captures the anguish and anger of Gail while her son is wasting away partly as a result of her former father-in-law’s actions. As Chase and the authorities get closer and closer to finding Paul and capturing his kidnappers, the movie evolves into more of a standard crime thriller full of riveting chases and shootouts. Overall, I found it to be a quite entertaining and truly fascinating film full of top-notch acting performances and thrills about a story I really did not know much about and am now quite surprised that the unbelievable true story has not been made into a movie earlier.