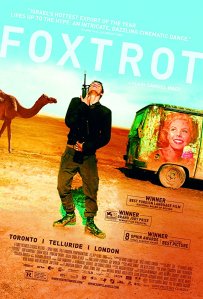 Directed by Israeli filmmaker Samuel Maoz who is best known for the award-winning 2009 film Lebanon, Foxtrot is an emotionally searing drama about grief and the experiences of those affected by the military but brings levity to the depressing material by mixing in dark humor and rather bizarre situations. The movie is split into three different acts in which the audience follows a upper middle-class Israeli family living in Tel Aviv as it relates to the son Jonathan’s military service in the Israeli Defense Forces. The beginning sequence reveals the intimate details of how Michael Feldman, played by the talented Israeli actor Lior Ashkenazi, and his wife Dafna, played by Sarah Adler, learn about the tragic death of Jonathan while serving. Finishing out the first act, the couple are faced with a bizarre twist about their son that angers Michael while leaving his wife relieved. The audience is then immersed into Jonathan’s story as a soldier who works, along with three other young men, at a very remote Israeli checkpoint where the greatest challenge is surviving boredom. Rather matter-of-factly, the soldiers are shown passing the time by doing such mundane activities as watching a can roll in a rotting shipping container serving as their barracks and even almost inexplicably performing the foxtrot dance alone. Finally, the plot returns to Michael and Dafna who are undergoing even more intense grief, interspersed with brief moments of humor about the absurdity of their situation. Overall, I found it to be a well-crafted film that reaffirms life and the importance of not always taking things so seriously even at the darkest points in one’s life; at times, it can be uncomfortably odd while still delving into serious issues surrounding the military.