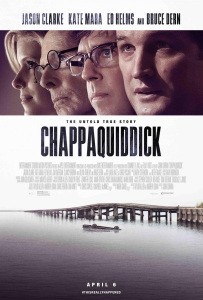 Based on actual testimony and historical records, Chappaquiddick is a compelling glimpse into one of the many tragedies that befell the Kennedy family and effectively portrays the complexities of Senator Ted Kennedy as a result of Jason Clarke’s terrific performance. The film chronicles the horrific defining moment of a young Ted Kennedy, played by Jason Clarke, and his political career: the so-called Chappaquiddick Incident in which a young woman named Mary Jo Kopechne, played by Kate Mara, died after a car driven by Kennedy was involved in an accident. Attending a party on Chappaquiddick Island near Martha’s Vineyard with the “Boiler Room Girls” who worked for Senator Robert Kennedy’s presidential campaign before his assassination, Kennedy becomes close to the 28-year-old Mary Jo discussing his brother’s untimely death before driving her back to a hotel late at night on July 18, 1969. Still under mysterious circumstances, the car veers off a small bridge into a body of water where Mary Jo is trapped and ultimately drowns while Kennedy escapes unharmed. The movie then shifts to its central focus of showing the audience the lengths taken by such a powerful political dynasty as the Kennedy clan and their close allies to cover up the misfortunate incident that would have serious repercussions for Senator Kennedy’s presidential aspirations. Immediately after the wreck, Kennedy enlists the help of his cousin Joe Gargan, played by Ed Helms, and lawyer friend Paul Markham, played by Jim Gaffigan, who both attended that night’s party, to clean up the PR disaster that could lead to criminal charges by the local police department. Later, at the behest of his tough yet very sick father Joe Kennedy, played by Bruce Dern, a group of powerful lawyers are assembled to basically brush off the accident as simply another unfortunate Kennedy tragedy in which Ted Kennedy is not culpable for the death of Mary Jo. Attempting to give a fair balance to the horrific events, the filmmaker presents what Kennedy claimed to have happened as well as the narrative ascertained by the police investigations. Furthermore, Kennedy is vividly depicted as a complicated figure who felt immense guilt over what happened at the same time that he is attempting to put the whole situation in a better light in which he takes liberties with the truth to become the victim and keep his political career intact. Overall, I felt it to be a truly fascinating movie that tries to present an unvarnished account of one of the most consequential occurrences in the Kennedy saga after the assassinations of JFK and his brother Robert: many people may not remember that the beloved Senator Ted Kennedy, at least by many Democrats, was intricately involved in such a tragedy.