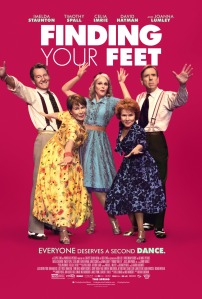 Directed by Richard Loncraine who is best known for romantic comedies and 2006’s thriller Firewall, Finding Your Feet is the quintessential British romantic comedy revolving around a group of senior citizens looking for joy and love and is brought to life by the highly talented cast. We first meet one of the protagonists Sandra Abbott, played by Oscar-nominated actress Imelda Staunton, after she discovers that her husband of many years has been cheating on her with her best friend. She moves out of her wealthy enclave to go to London and stay with her older sister Bif, played by Celia Imrie best known for 2012’s The Best Exotic Marigold Hotel. Unlike Sandra, Bif is very much a free spirit who is happy to live a modest life in a crowded inner-city apartment and has a group of eccentric friends who all take a dance class at the local community center. Eventually, Sandra is convinced to participate in the dance class in order to get over her pending divorce and reconnect to others her age and outside her comfort zone. Through a series of charming scenes marked by typically dry British humor, she meets Bif’s friends and dance classmates, including the down-to-earth and delightful Charlie, played by acclaimed British actor Timothy Spall, the jovial Ted, played by David Hayman, and the flirtatious Jackie, played by comedic actress Joanna Lumley. The romantic part of the movie comes into play as Sandra begins to fall in love with Charlie; at that very moment, Sandra evolves from being preoccupied with wealth and social status to falling for a man who has very little wealth and lives on a river barge in London. Their romance is complicated by unforeseen circumstances, including Sandra’s husband trying to make amends and Charlie’s past love life. Although much of the movie is an innocent feel-good movie, there are some sentimental moments in which life is brought down to earth through the universal aspects of aging, including grief and loss of loved ones. Overall, I found it to be a delightful British film filled with witty innocent humor and a realistic pinch of bittersweet emotions that is elevated by a terrific cast of characters.