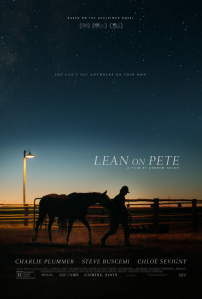 Directed by British filmmaker Andrew Haigh who is best known for 2015’s 45 Years, Lean on Pete is a heartwarming and sometimes heartbreaking tale about a young man living in challenging circumstances who is able to overcome his life’s difficulties through his relationship with an aging racehorse. The film is notable for the truly astounding performance from the young actor Charlie Plummer who plays a 15-year-old named Charley Thompson recently arrived to Portland, Oregon living with his troubled single father Ray. Living somewhat of a vagrant lifestyle trying to scrape by with small jobs to help support him and his father and thereby unable to attend school, Charley stumbles into a job working for a down-on-his-luck horse trainer named Del, played by the terrifically grumpy Golden Globe winner Steve Buscemi, at the local race track. Buscemi’s character as well as a female jockey named Bonnie, played by Chloë Sevigny, take Charley on the lower racehorse circuit. He quickly forms a bond with one of the quarter horses, Lean On Pete, who is simply used by Del as a cash cow in second-rate races and is eventually destined to slaughter after several weak performances. Never having a real relationship with friends or family, Charley views Pete as more than just an old horse and more of a friend. After another personal tragedy, Charley decides to run away with Pete and set out on a epic adventure across the West to find his beloved aunt. The unlikely duo find themselves crossing lonesome and treacherous landscapes, meeting all sorts of characters, and running into trouble. In addition to the powerful performances, the filmmaker does an excellent job of setting up a compelling narrative structure by dividing the film into three parts that coincide with the character development of Charley as he suffers setbacks and discovers himself. Overall, I found it to be an emotionally powerful drama that beautifully shows the important connection between humans and animals and is filled with groundbreaking acting: introducing the world to the talents of the up-and-coming actor Charlie Plummer.