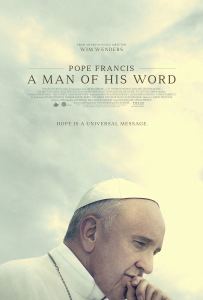 Directed by acclaimed German filmmaker Wim Wenders best known for the award-winning 1984 film Paris, Texas, Pope Francis: A Man of His Word is a fascinating documentary that explores the central tenets of Pope Francis and his views on Catholic theology in the context of the ever-evolving modern world. Becoming the pope in 2013 after serving as the Archbishop in his hometown Buenos Aires, Argentina, Pope Francis arose as a remarkable choice for the Catholic Church as a result of being a Jesuit from South America and his unique decision to take the name Francis in honor of Saint Francis. A majority of the film is essentially a wide-ranging sermon given by Pope Francis to the audience through a series of interviews with the filmmaker who also acts as the narrator. The documentary also contains several dramatic reenactments of Saint Francis of Assisi who lived in 13th century Italy to illuminate why Pope Francis was the first pope to choose the name Francis and how Pope Francis’ theology derives from the humble and nature-focused Saint Francis. Interspersed with footage of his many visits to the people around the world, the interviews touch on the most pressing issues of his papacy, including economic inequality, the environment, global peace, and respect for all humanity no matter their religion. It is important to note that the movie is not a biographical documentary about his life but rather has the main purpose of promoting the positive messages of Pope Francis. Unlike almost any other pope in history, Pope Francis is massively popular to his followers and those of all faiths as a result of his progressive ideas on religion and philosophy in today’s chaotic world. Overall, I found it to be a deeply insightful documentary about one of the most powerful religious figures and powerfully illustrates Pope Francis’ radical departure from previous popes to provide a more inclusive and optimistic theology. Even if you are not Catholic or even a Christian, the viewer comes away with a greater appreciation of Pope Francis and his hopeful mission.