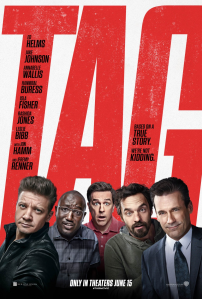 Based on an unbelievable true story as featured in The Wall Street Journal in 2013, Tag is an entertaining and sometimes hilarious comedy with such a preposterous premise that it probably would not have worked had it not have been based on real life events. The plot revolves around is a group of friends who grew up together as kids have been engaged in a game of tag for almost 30 years that always takes place during the month of May. The five friends now in their forties include Ed Helms who plays the sort of ringleader Hoagie, Jon Hamm who plays the successful insurance executive Bob Callahan, Jake Johnson who plays the stoner Chilli, Hannibal Buress who plays the goofball Sable, and Jeremy Renner who plays the successful and untouchable tag player Jerry. In what possibly could be their last game of tag, they all converge on their hometown of Spokane, Washington where Jerry who has never been tagged in his whole life is about to get married. Through a series of elaborate ploys, the four others try desperately to finally tag Jerry even though his fiance strictly forbids them from doing it during the wedding activities. The filmmaker adds an extra dose of humor by showing several of their antics in slow-mo as if it is an action movie and in which the characters’ ridiculously serious inner dialogue can be heard. Also, in order to round out the movie, there is also a love triangle between Chilli and Callahan over Rashida Jones’ character, as well as several unexpected heartwarming moments involving the lifelong friends and their futures. One part of the film that I thought was unnecessary was having a Wall Street Journal reporter appear as a character who really did not add anything to the story. Overall, I found it to be a good light-hearted film that helps pass the time and is able to pull off a story with such a preposterous yet creative story.