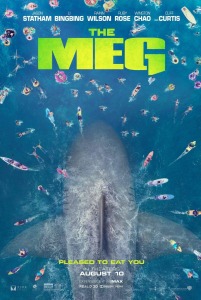 Directed by Jon Turteltaub who is best known for 1993’s Cool Runnings and 2004’s National Treasure, The Meg is a silly summer blockbuster about a gigantic shark and the action-filled attempts to hunt it down, making for an entertaining B-movie experience. The movie begins with the skilled deep sea scuba diver Jonas Taylor, played by action star Jason Statham, on a mission to rescue the crew of a submarine. The story continues years later after the operation did not completely succeed and follows a group of scientists working at a new underwater research facility funded by an overzealous billionaire played by Rainn Wilson. Eventually, a 75-foot-long prehistoric shark known as the Megalodon is unwittingly released. The horrific underwater monster escaped the deepest recesses of the Pacific Ocean after an exploratory mission led by Dr. Zhang, played by Winston Chao, along with his oceanographer daughter Suyin, played by Li Bingbing, and the rest of the scientists, including one played by Ruby Rose. The retired Jonas is called upon to help save members of the team who are trapped as a result of the Megalodon damaging their submersible. The thrilling and oftentimes ridiculous acts of heroics by Jonas take up most of the rest of the movie, interspersed with some rather stale cheesy moments. The number of people attacked by the shark rises throughout the film as the humongous sea creature rapidly approaches a heavily populated beach on the coast of China. Overall, I found it to be a good mindless fun cinematic experience that resembles much more of a Sharknado shark movie that does not take itself too seriously and is very much unlike the classic Jaws that relied much more on psychological and non-violent terror.