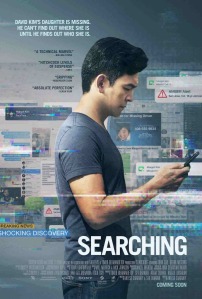 Directed by first-time feature filmmaker Aneesh Chaganty, Searching is an excellent thriller with terrific acting performances and a suspenseful script, but its major asset is its innovative use of shooting the entire film from the point-of-view of such modern technological devices as smart phones and computers. The plot follows a devoted father living in San Jose, California named David Kim, played by John Cho best known for his role in the stoner comedy trilogy Harold and Kumar first released in 2004, who tries to always be there for his daughter Margot after his wife Pamela dies from cancer several years before the film takes place. One day, his life falls apart after his beloved sixteen-year-old daughter goes missing after a study group, and he comes to the realization hours later that he must report his daughter as missing to the local police. The case is assigned to Detective Rosemary Vick, played by Emmy winner Debra Messing best known for her role in the popular NBC sitcom Will and Grace, who first treats the disappearance as a runaway but encourages David to look further into Margot’s personal life, including contacting her friends that may know more about what happened. Through his extensive investigations of his daughter’s online presence on Facebook and a video blogging website, he is able to piece together important clues that he gives to the police and leads them to several vital pieces of evidence about where she was last seen and possible motivations behind her vanishing. Towards the movie’s conclusion, David unearths a much more complex set of circumstances surrounding the mystery that leads the audience on a thrilling journey of unexpected plot twists. The filmmaker makes the film extremely relevant to today’s society by telling all of the story through the digital tools that many of us rely on every day and without following the format of a traditional movie with its use of film cameras. Almost all of the visuals are comprised of David’s computer screen as he makes Facetime video calls and goes through social media as it would appear in real life on screen. At first, I thought this rather unusual filmmaking technique would be too much of a gimmick, but I was pleasantly surprised to discover that it only heightens the suspense and creates a very provocative and gripping experience understandable to the current digital generation. Overall, I found it to be one of the best thrillers that I have seen in the past few years and is cinematically important for developing a brand-new filmmaking style that is truly eye-opening for audiences.