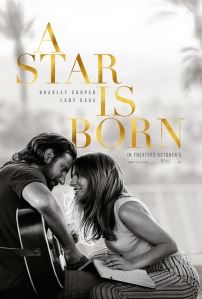 The third remake of the original 1937 movie of the same name later made into a 1954 version starring Judy Garland and most recently a 1976 version starring Barbra Streisand and Kris Kristofferson, A Star is Born is a terrifically well-made movie remarkable for Bradley Cooper’s directorial debut and the breakthrough acting performance of Lady Gaga. The updated story follows hugely successful yet troubled country singer Jackson Maine, played by Oscar nominee Bradley Cooper, who makes a surprising discovery at a drag bar following one of his concerts of a new talented singer named Ally, played by pop superstar Lady Gaga in her dazzling acting debut. Over time, Jackson encourages her to perform her own songs that she has written over the years, despite her misgivings over her appearance, and she becomes a musical star in her own right. As she rapidly rises to fame, the wild Jackson suffering from debilitating substance abuse begins to fall in love with Ally, but he starts to get jealous of her newfound stardom after she signs with a record label with a new cutthroat manager. Jackson’s much older brother and manager Bobby, played by the gravelly voiced Golden Globe nominee Sam Elliott, is especially worried about Jackson and cautions Ally that he can sometimes go out of control. Along his tumultuous journey and her rocketing success, Jackson runs into his old friend played by Dave Chappelle as well as having a tense relationship with Ally’s father played by Andrew Dice Clay. With the help of Ally, he realizes that he must do something to turn his life around and accept Ally’s successful career. Although it is an age-old story of fame and romance, the film is able to set itself apart from its predecessors by presenting a story relevant to today’s culture at the same time providing magnificant firsts, for first-time director Bradley Cooper and first-time actress Lady Gaga. Furthermore, I was particularly struck by the terrific performance of Sam Elliott who provides an heartfelt anchor to the storyline and a veteran quality to the movie. Overall, I found it to be an excellently heartbreaking and enjoyable cinematic experience that incisively explores the complexities of fame and pays great homage to the music industry.