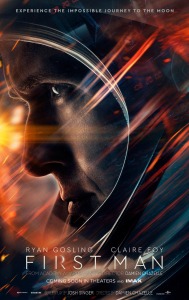 Directed by Damien Chazelle who is best known for 2014’s Whiplash and 2017’s La La Land for which he won the Academy Award for Best Director, First Man is a terrific biographical movie that explores the personal side of Neil Armstrong and the Apollo 11 mission and is anchored by excellent acting performances and dramatic cinematography. We first meet Neil Armstrong, played by Golden Globe winner Ryan Gosling, in 1961 as he is attempting an extremely dangerous test flight at Edwards Air Force Base where he is a military test pilot. At the time, he and his wife Janet, played by Golden Globe winner Claire Foy, are struggling with the sickness of their young daughter Karen who is undergoing treatment for cancer; her memory will later serve throughout the film as a sort of metaphor for the personal life of Armstrong as he becomes world-famous for being the first man on the moon. Eventually, he is accepted to the NASA astronaut program and becomes one of the astronauts in Project Gemini, the space program that would lead into the Apollo missions with the goal of a lunar landing. Living in Houston in 1965, he develops close friendships with fellow astronauts, especially his neighbor Ed White, played by talented actor Jason Clarke, and his wife befriends the other astronaut wives who also have young children. While much of the film focuses on the more personal aspects of Armstrong and his family coping with his hazardous job, the filmmaker does an excellent job of recreating the very tense rocket launches in which the slightest problem could be catastrophic for Armstrong and the other astronauts aboard. Leading up to the climax of the film, Armstrong learns from NASA’s Chief of the Astronaut Office Deke Slayton, played by Emmy Award winner Kyle Chandler, that he will be the commander on Apollo 11, the mission selected for the first landing on the moon, and will be joined by the often lighthearted Buzz Aldrin, played by Cory Stoll best known for his role in the Netflix series House of Cards, and the Command Module Pilot Michael Collins. Before he is selected for the historic mission, tragedy strikes NASA on January 27, 1967 when a fire during a routine test for Apollo 1 engulfs the capsule resulting in the death of three astronauts, including Armstrong’s close friend Ed White and one of the original astronauts Gus Grissom, played by Shea Whigham best known for his role in the HBO series Boardwalk Empire. The final scenes of the movie revolve around the actual mission of Apollo 11, complete with the dramatic takeoff, four-day flight to the moon, undocking the Lunar Module, and finally landing on the moon’s surface on July 20, 1969 with hundreds of millions of people watching around the world. After becoming the first human to touch the moon, Armstrong’s immortal moon walk is portrayed as a much more introspective personal look into his life and what led up to such a historical event for all of mankind. He makes a touching tribute to his beloved daughter Karen, which helps bring the movie back to the beginning as he begins to lose his child to cancer. Overall, I found it to be one of the more memorable movies that effectively takes a quite different and more emotional approach to the space movie genre, that was elevated by the talented performances given by Ryan Gosling and Claire Foy, and kept the audience on the edge of their seats during the magnificent spaceflight sequences. The film must now be included in the historical space movie canon, joining the likes of The Right Stuff and Apollo 13 with each contributing a different aspect to the story of humans in space. For instance, the seminal 1983 movie The Right Stuff provided more of a historical background by showing Chuck Yeager breaking the sound barrier and the early efforts of the Mercury program that ultimately led the United States to the moon. On the other hand, the 1995 Ron Howard movie Apollo 13 was much more of a thriller in which the characters must figure out a way to survive after a catastrophic failure and focuses more on the actual mission.