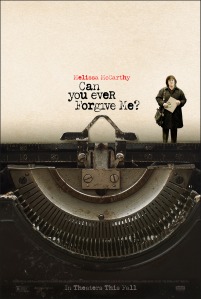 Based on the 2008 confessional memoir of the same name written by the film’s subject Lee Israel, Can You Ever Forgive Me? is a deeply fascinating real life story about a desperate writer who resorts to criminal literary forgery and is a well-crafted movie remarkable for its incredible acting, especially from the comedian Melissa McCarthy who puts on an Oscar-worthy performance that reveals her to be an extremely talented dramatic actress. We first meet the previously best-selling biography author Lee Israel, played by the popular Oscar-nominated comedic actress Melissa McCarthy, in the 1990s at a low point in her career when not even her agent is interested in her new work and is willing to do practically anything for cash to support her lonely existence with her aging cat. With her sarcastic wit and overall unpleasantness, Lee devises a plan to embellish and later outright forge letters from famous writers and sell them to local New York City book sellers interested in literary artifacts. Her criminal enterprise grows rapidly after she realizes that she can make hundreds of dollars from just one letter supposedly written by the likes of deceased literary giants as Dorothy Parker and Noël Coward. The movie becomes somewhat of a dark comedy after the sardonic Lee begrudgingly befriends a fellow witty loner and drunkard named Jack Hock, played by the fabulous critically acclaimed British actor Richard E. Grant. They both engage in drunken escapades through the seedy streets and dive bars of Manhattan, and eventually Lee tells Jack about her forgeries and decides to enlist Jack to help her as her accomplice. As Lee gets deeper and deeper into her criminal activities and becomes increasingly careless, both Lee and Jack engage in witty and often ribald banter and are unafraid to talk about their homosexuality. The film simply works as a result of the magnetic chemistry between the two talented actors who bring a certain level of realism and brutal sarcasm that is irresistible to watch. Despite the fact that Lee is quite the curmudgeon and appears unapologetic about her miscreant behavior, the audience is somehow drawn to the character and comes to empathize with her desperation which led to her being investigated by the FBI. Towards the end of the movie, she does face serious consequences for her forgeries after being tipped off by sellers to the FBI and is even betrayed in a much more personal way that ultimately leads to her conviction. Overall, I found it to be a truly captivating movie that leaves the audience wanting more from the compelling dynamic characters that help fashion an extraordinary tragic comedy, and one of its greatest achievements is showing the versatile and skillful work from Melissa McCarthy who proves to be a force to be reckoned with in serious dramatic roles.