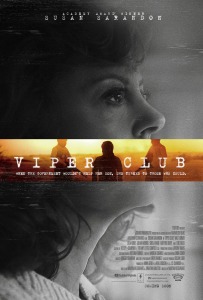 Directed by Iranian-American filmmaker Maryam Keshavarz best known for the critically acclaimed 2011 film Circumstance, Viper Club is a surprisingly unsatisfying dramatic film about a mother coming to grips with her son being taken hostage as a freelance war correspondent, and the only bright spot of the movie is the acting given by Susan Sarandon. The story follows a longtime emergency room nurse named Helen, played by Oscar-winning actress Susan Sarandon in definitely not her best role, desperate to free her son who has been captured by a terrorist group while on assignment in the war-torn Middle East. It follows her quest to plead with American government officials, especially the FBI, to assist with her son’s case by either paying the ransom or authorizing military action to rescue him. Since it is illegal for the government or any American citizen to pay ransom to terrorists, Helen eventually gets in touch with a secret group of fellow journalists and wealthy benefactors who offer to help her meet the demands of her son’s hostage takers. Known as the Viper Club, the organization’s de facto leader is a wealthy woman whose son was also held for ransom named Charlotte, played by Emmy Award-winning actress Edie Falco best known for her role in the HBO TV series The Sopranos, and the logistics are run by the formidable Sam, played by Golden Globe-nominated actor Matt Bomer. Throughout much of the film, Helen struggles with keeping her son’s dire situation secret even from her closest coworkers and family members and figuring out a way to go around the government to finally free her only child from captivity. Although the Viper Club is able to raise a significant amount of money given by sympathetic wealthy donors towards paying the ransom, Helen eventually realizes that her son may never return home and that she may have to live with the knowledge that her son could be murdered as a result of his extremely dangerous passion to pursue a career in war journalism. Overall, I was somewhat disappointed by the high expectations that I had for the movie, with its unique and fascinating plot and well-known cast, and came away from the movie wanting more action and drama that I assumed would be part of the storytelling; the obviously talented Susan Sarandon gave her best, but ultimately her performance was not enough to pull off a compelling film.