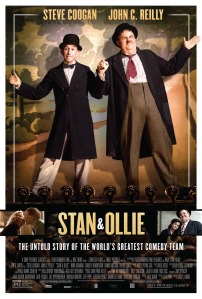 Based on the true story of one of the world’s most famous comedic duos Laurel and Hardy during their late career, Stan & Ollie is a truly wonderful little movie about the heartwarming relationship between Laurel and Hardy despite their occasional disagreements on their very last tour together across the United Kingdom. We first meet the Englishman Stanley “Stan” Laurel, played by the Oscar-nominated British comedian Steve Coogan, and the American Oliver “Ollie” Hardy, brilliantly played by Oscar-nominated American comedian John C. Reilly who was nominated for a Golden Globe for his role, toward the end of the height of their career in the 1930s making movies for the famous comedy producer Hal Roach, played by Danny Huston. Almost two decades pass before we meet the two again. Partly for financial reasons, the comedians finally get over their years-long rift over Laurel leaving Hal Roach Studios and Hardy making a movie without his longtime partner Laurel. In the twilight of their careers, they agree to embark on a rather small-time music hall tour of England and Ireland in 1953 comprised of their most famous acts in addition to several new ones that Laurel has written. Over the course of the non-stop traveling schedule, both comic legends are often at each other’s throats as a result of the disappointing crowd turnouts and the acknowledgement that their careers are inevitably ending soon. Through recreations of their bits and the behind-the-scenes rehearsals, the filmmaker is vividly able to portray the comedic genius of the larger-than-life Laurel and Hardy whose diametrically opposed personalities and physical appearances work perfectly for comedic effect. The actors, particularly John C. Reilly who is almost magically transformed into the overweight mustached Oliver Hardy, help to bring the world famous comedians to life even though they have been dead for over half a century. The film also does a terrific job of painting a much more intimate picture of the pair that explores the complicated friendship between both men in which they often argue but, at the end of the day, love one another as if they were family. Overall, I found it to be one of the most emotionally touching movies in recent memory that is only able to work as a result of the outstandingly realistic depictions of the one-and-only Laurel and Hardy given by the excellent actors; it is a much more personal and nuanced exploration of Hollywood comedy luminaries that goes beyond simply reliving their funniest bits.