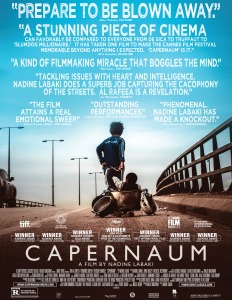 Written and directed by critically acclaimed Lebanese actress and director Nadine Labaki, Capernaum is a beautiful and emotionally powerful film that hits you in the heart with its heartbreaking story about those living on the edge of society and life in the impoverished neighborhoods of Lebanon. The film literally translated as chaos and spoken in mostly Arabic tells the tragic life of a twelve-year-old boy named Zain, remarkably played by first-time actor Zain al Rafeea, who is largely left to his own devices on the rough streets of Lebanon. At the beginning of the movie, he decides to sue his neglectful parents for giving birth to him and allowing him to live such a miserable existence. Mostly comprised of a series of flashbacks, the story simply yet effectively follows Zain who one day leaves his overburdened and ever-growing family in search of a better life after his beloved and too young sister is married off to an older man. Eventually, he encounters an undocumented young Ethiopian female refugee named Rahil, realistically played by Yordanos Shiferaw, who asks the street smart Zain to look after her baby son Yonas, played by the adorable yet fragile Boluwatife Treasure Bankole. Through the eyes of the young Zain who struggles by himself to support the still nursing Yonas after his mother is detained, the remainder of the film depicts the horrifying and deeply depressing challenges of living in abject poverty on the chaotic streets of Lebanon. Hugely deserving of the Oscar nomination for Best Foreign Language Film, the movie is so heart-wrenching as a result of the extremely talented filmmaker’s vivid ability to scratch the surface of what life must be like for those living in very poor and quite frankly miserable places around the world. She is able to capture this so brilliantly by incorporating breathtaking cinematography presenting the underbelly of Lebanon with the use of predominantly untrained actors who really lived very much like their characters. Overall, I found it to be an utterly distressing yet necessary piece of art and storytelling; it is so realistic that I do not remember another movie over the past several years with so much impact that I thought about the characters with such a heavy heart for days after watching this truly earth-shattering film.