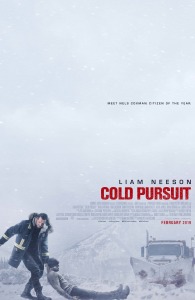 Directed by Norwegian filmmaker Hans Petter Moland who directed the original 2014 Norwegian film that Cold Pursuit is a remake of, Cold Pursuit is a dark comedy action film that has a uniquely twisted and humorous script and is led by another entertaining action star performance given by Liam Neeson. The film follows a ski town snow plow driver named Nelson Coxman, played by Oscar nominee Liam Neeson, who seeks vengeance for the death of his son by going after competing drug gangs in in the remote fictional town of Kehoe, Colorado. His major target is a Denver drug lord nicknamed Viking, played by a psychotic Tom Bateman, who his son got mixed up with and Nelson goes on a killing spree viciously murdering several of Viking’s men. Eventually, a war between Viking and a Native American drug lord named White Bull, played by Tom Jackson, after Viking suspects White Bull of being responsible for the deaths of his men. Along the way, Nelson’s brother nicknamed Wingman, played by William Forsythe, who used to work for one of the drug cartels helps him find possible leads in the death of his son. In a similar fashion like Liam Neeson’s first action flick Taken but to a much more bloody degree, an absurdly high body count quickly rises, especially towards the climax when the drug cartels and Nelson engage in a all-out shootout. Overall, I found it to be an entertaining action movie with the right amount of dark humor to mark a departure from the tropes of the often over-bloated action genre, but it is definitely not for the faint of heart as a result of the over-the-top violence.