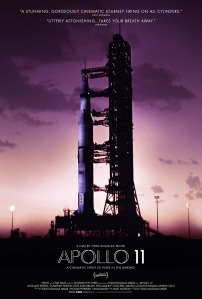 Directed by Todd Douglas Miller best known for the 2014 documentary Dinosaur 13, Apollo 11 is a stunning achievement of a documentary that provides an up-close look into the historic Apollo 11 NASA mission that led to the first humans landing on the moon. Unlike a traditional documentary, the film quite effectively shows the inner workings of the events surrounding July 1969 without the use of narration, voiceovers, or interviews. It presents the Apollo 11 mission in a linear fashion with never-before-seen footage lining up with the actual time that each incident took place. The archival footage that has not been public until now has been restored to astounding results that appear as if the footage was just filmed on modern cameras of today. Seeing the engrossing documentary in IMAX was particularly rewarding because some of the footage is in stunning 70 mm perfect for large movie theater screens. In addition to the extraordinary restoration, the film shows the importance of editing because it was edited in such a way to make for a truly compelling cinematic experience that made complete sense even without direction from a narrator. Yes, the story is universally known through history books and countless other documentaries and narrative films, but I have never seen a movie that has brought the Apollo 11 mission to such life as a result of presenting the actual footage from the various stages of such a technically challenging event. Overall, I found it to be one of the more exciting documentaries that I have ever seen and whose brilliant filmmakers and editors brought something new and very special to an already well-known event; it is a particularly important and timely documentary as we approach the fiftieth anniversary of Apollo 11.