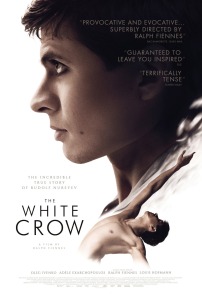 Directed by British actor Ralph Fiennes in his third film as director, The White Crow is a fascinating movie about one of the most famous ballet dancers and focuses on the seminal moment of his life in which he defects from the Soviet Union. Based on his real life, the film follows Rudolf Nureyev, played by Oleg Ivenko, and three distinct phases of his life: his early life in a struggling rural Soviet family, early career at a famous St. Petersburg ballet school, and his defection occurring during his company’s visit to Paris. The stereotypical tortured genius, he often exhibits egotistical behavior in which he does not shy away from berating his instructors, but his brilliant and unique talents are always desired by the Soviet ballet elite. The middle part of his life revolves around his relationship with the famed ballet teacher Alexander Ivanovich Pushkin, played by Oscar-nominated actor Ralph Fiennes, and his increasingly personal and strange relationship with Pushkin’s wife. The more contemporary chapter in his life is a rather slow-paced depiction of his falling in love with Western culture and society when his Soviet ballet company has a weeks-long residency at the Paris Opera in 1961 at the height of the Cold War. Nureyev enjoys the nightlife of Paris with his new-found French friends, and he eventually decides that he needs to defect from the Soviet Union in order to pursue a career in the West with much more freedom as an artist and individual. The one major problem area of the film is the often convoluted setup of having the story switch back and forth between three different time periods. Overall, I found it to be a very compelling story about a true genius against the backdrop of the Cold War that, despite the movie’s few flaws, feels like a very authentic portrayal of Rudolf Nureyev as a result of the film’s use of Russian dialogue and several beautiful dance sequences.