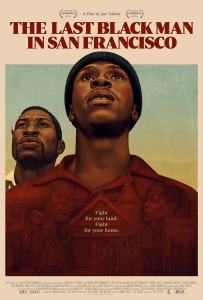 Directed by first-time feature filmmaker Joe Talbot who won the award for Best Directing at the 2019 Sundance Film Festival for this film, The Last Black Man in San Francisco is a breathtakingly beautiful cinematic elegy to a friendship and a city and is one of the best movies, if not the best movie, I have seen so far this year as a result of its magnificent cinematography and quietly rich storytelling. The film is a collaboration between the director Joe Talbot and the main actor Jimmie Fails who are long time friends from the city that inspired them, San Francisco. The rather simple story follows a young black man named Jimmie, played by Jimmie Fails as a version of himself, struggling to make a living in the increasingly expensive city of San Francisco and his obsession over his old family home located in the one-time black and Asian neighborhood of the Fillmore District. He lives with his best friend Mont, played by Jonathan Majors, at the small run-down house of Mont’s blind father, played by Danny Glover. Mont is a very quiet aspiring artist and playwright with a visibly unusual intellect trapped by his situation in life. The movie is very much a ballad and exploration of the ever-changing San Francisco with its current housing crisis and the rapid gentrification primarily affecting minority and lower-income communities. Jimmie often accompanied by Mont visits his deceased grandfather’s old Victorian house on a weekly basis to help maintain its condition despite upsetting the current residents. Eventually, the duo find the opportunity to live in the house as squatters after the previous owners suddenly vacate the house. The house is a metaphor for the old San Francisco and especially that neighborhood, which at one time was a welcoming place for African Americans several decades ago. The loss of the house by his family represents the change in the neighborhood and the city as a whole largely displacing minority populations in favor of predominantly Caucasian people who could afford the now exorbitant housing prices. What really makes the movie special is the filmmaker’s unique ability to combine mesmerizing cinematography, a moody score and soundtrack complete with a haunting rendition of the famous 1967 song San Francisco, and subtle yet memorable acting performances. With his skillful and seemingly effortless creative decisions, the novice filmmaker somehow crafts one of the most beautiful cinematic dedications to a city and the power of friendship, almost as if he is a veteran and award-winning director. Overall, I found it to be a truly magnificent masterpiece of filmmaking that is able to convey a rather basic premise and transform it into a tender and often heartbreaking story of humanity marked by such exquisite and meditative cinematography and music.