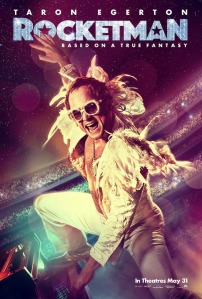 Directed by Dexter Fletcher who was the director who finished the 2018 Freddie Mercury biopic Bohemian Rhapsody, Rocketman is a truly extraordinary cinematic experience that perfectly encapsulates the fantastical career of Elton John by presenting the movie as a musical fantasy that definitely breaks the mold of the traditional biopic. Punctuated by well-choreographed dance sequences set to Elton John’s music, the film is a series of rapid-fire flashbacks told from the personal perspective of Elton John, played by the terrific Taron Egerton best known for his role in The Kingsmen action comedy movie franchise, while he is receiving treatment at a rehab facility. The story retraces his early life living in a dysfunctional family led by his dismissive mother Sheila, played by Bryce Dallas Howard, but his musical talents are encouraged by his kind-hearted grandmother who supports his decision at such a young age to enroll in the prestigious Royal Academy of Music. Eventually, he decides to change his name to Elton John and take on a flamboyant stage persona, which coincides with his meteoric rise to global musical fame. His amazing ability to place music to lyrics is greatly enhanced when he begins a writing partnership with a songwriter named Bernie Taupin, played by Jamie Bell. As is the case with a majority of musical geniuses, he quickly spirals out of control with the heavy influence of alcohol, drugs, and sex and also under the unhealthy pressure of his music manager and one-time lover John Reid, played by Richard Madden. The filmmaker makes the brilliant decision to convey the excesses and low points of Elton John’s personal life through the use of his own music with lyrics that somehow perfectly fit within the context of each and every scene. Overall, I found it to be a fabulously entertaining cinematic journey that takes a refreshing twist on the traditional musical biopic by incorporating Elton John’s unique personality and sound; it is undoubtedly one of the most creative films of the year and runs laps around last year’s Bohemian Rhapsody.