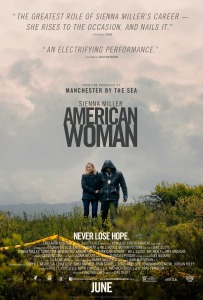 Directed by Jake Scott who is the son of acclaimed British filmmaker Ridley Scott, American Woman is a powerful drama following the troubled life of a young mother who loses her daughter and is marked by terrific acting performances and an emotionally intriguing script. The movie takes place over the course of 11 years, beginning in 2003 when we first meet the protagonist Debra, played by Golden Globe nominee Sienna Miller in one of her best performances, raising her teenage daughter Bridget and her grandson Jesse. One night after meeting with Jesse’s distant father Tyler, Bridget mysteriously disappears in their rural industrial town in Pennsylvania, and Debra is devastated and accuses Tyler of being somehow involved. Throughout the story, she is somewhat comforted by her close sister Katherine, played by Emmy nominee Christina Hendricks, who lives across the street with her kind husband Terry, played by comedian Will Sasso. The film continues several years later after Bridget’s disappearance is officially unsolved and the increasingly despondent Debra is in a abusive relationship while also supporting Jesse as he gets older. Later, another few years go by and Katherine encourages Debra to go out with Terry’s coworker Chris, played by Emmy winner Aaron Paul, who eventually becomes a part of the family and takes on the role of a father figure for Jesse who still does not know what happened to his mother. A very dramatic and often tragic story, the filmmaker does an excellent job of trying to understand the grief that a parent goes through when their child is missing, as well as the trials and tribulations of being a working-class single mother living in an economically-depressed town. Overall, I thought that Sienna Miller was brilliantly able to bring such a dynamic and desperate woman to life and, in turn, made the movie one of the more heartbreaking yet must-watch dramas of the year.