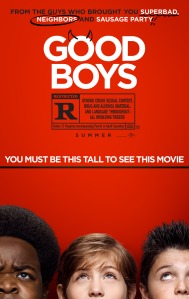 Produced by comedian Seth Rogen and his producing partner Evan Goldberg, Good Boys is a well-done vulgar comedy that can be best described as a tween version of the 2007 comedy Superbad because it follows a group of adolescent boys going on ridiculous and cringe-worthy adventures involving very inappropriate subject matter, primarily of a sexual nature. The main characters are three sixth graders comprising of a relatively shy Max, played by Jacob Tremblay best known for his role in the critically acclaimed 2015 movie Room, wannabe singer and bad boy Thor, played by Brady Noon, and mama’s boy Lucas, played by Keith L. Williams. Their R-rated exploits begin with Max’s desire to attend a party hosted by the popular kids so that he can kiss his crush. Leading up to this anticipated party, the boys end up encountering high school girls looking for drugs and stealing alcohol while in pursuit of replacing a destroyed drone owned by Max’s father, played by Will Forte. Rather ironically, the actors who will obviously go on to promising acting careers would never be allowed to see the actual movie that they are stars in as a result of the risque material. Also, to my great surprise, there was actually a good message contained within the film: the special power of friendships and how such friendships evolve over the years as a result of the normal process of growing up. Even though close friends may grow apart, the bond they had at one time will always be a part of their lives and will help shape future good memories. Overall, it is definitely a movie that is not for everyone as a result of its ribald nature involving children, but it is a very entertaining and hilarious look at the things that a group of young boys experience as friends, albeit in an over-the-top fashion.