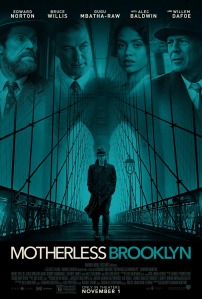 Written, directed, and produced by actor Edward Norton, Motherless Brooklyn is a well-crafted neo-noir crime drama that is somewhat remarkable for its unique storytelling and fascinating characters but, unfortunately, is bogged down by convoluted plotlines and a long runtime. Set in 1957 in New York City, the film follows a private investigator named Lionel Essrog, played by Edward Norton in a very committed performance, who has struggled his whole life with Tourette syndrome yet has a photographic memory that makes him an asset for the detective agency he works for under his beloved boss Frank Minna, played by Bruce Willis. Eventually, he is taken on a rabbit hole as he tries to uncover the circumstances surrounding Frank’s death, which is personally devastating since Frank is the one who saved him from an orphanage when Lionel was a child. Lionel is deeply committed to the investigation and is hesitantly assisted by the other investigators that work for Frank’s agency, including a rather suspicious detective who is played by Bobby Cannavale. Posing as a reporter, Lionel learns much more about the corrupt inner-workings of the city and its boroughs and the real power structure led by a publicly unassuming municipal official and developer named Moses Randolph, played by Alec Baldwin. Appearing rather odd to those he encounters along the way as a result of his Tourette-induced quirks, Lionel realizes that Moses may have something to do with Frank’s murder after he talks with an eccentric man named Paul, played by Willem Dafoe. He is suspicious of Moses after he connects several clues left behind by Frank that take him to a beautiful African American woman named Laura Rose, played by Gugu Mbatha-Raw, who works for an organization fighting gentrification and the overdevelopment of minority neighborhoods. Throughout the movie, a romantic relationship between Lionel and Laura seems to be developing, which forces Lionel to open up and reveal some of his secrets. Without giving too much of the story away, suffice it to say that the film is chock-full of plot twists that can be overly complicated and drawn-out. Overall, I thought the multi-talented Edward Norton did a great job of recreating the trappings of a classic film noir with dark and mysterious settings, characters with believable backstories, and a quintessential detective story. However, it could have been a much better movie if it was more condensed into a shorter and less confusing story that could be better followed by the audience.