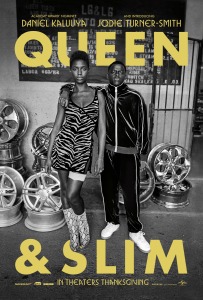 Directed by music video filmmaker Melina Matsoukas in her feature film debut and written by Lena Waithe best known for her work on the Netflix comedy series Master of None, Queen & Slim is a provocative and wholly unique drama about a very specific African American experience revolving around a couple on a first date who end up on the run from the law. The movie is remarkable for its terrific acting performances and nuanced script that begins with the accidental shooting death of a police officer who quickly escalates a unjust traffic stop of the black couple who we only know as Queen, played by British newcomer Jodie Turner-Smith, and Slim, played by Oscar nominee Daniel Kaluuya. Facing an uncertain future at the hands of authorities, the two decide to leave the scene on a dark and cold Ohio night and go on a Bonnie and Clyde-esque road trip to evade authorities. They first meet up with Queen’s Uncle Earl, played by Bokeem Woodbine, who lives in New Orleans as a pimp and is willing to help Queen as a favor. Throughout the movie, the fraught racial intersections of white and black America come to the fore with the two largely recognized as symbols of racial injustice from the perspective of the African American community while the majority of white police forces see them as a deadly criminal threat. The filmmaker does an excellent job of keeping the audience engaged in an otherwise incisive social commentary by focusing on the gradual development of a romantic relationship between very different individuals stuck in the same situation: Queen who is a criminal defense attorney and Slim who is a devout Christian. Their journey to freedom is also captivating as a road trip movie in which the audience gets to meet a wide range of interesting characters who have different motivations for helping the duo, including a white couple who are played by Chloë Sevigny and the musician Flea. Rather unexpectedly, they also run into people who would otherwise be against them as so-called cop killers, as well as black Americans who sympathize with their complicated situation that has race at the heart of the issue. Overall, I found it to be a beautifully-crafted film that tells a poignant story of a budding romance between a pair of individuals deeply affected by a system of racial inequality; it is a story of love and a nuanced journey through the soul of black America, all put into motion by a very violent and complicated beginning.