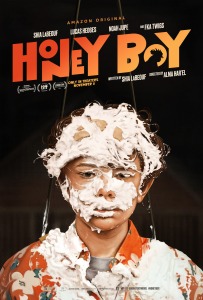 Directed by Israeli-American documentarian and music filmmaker Alma Har’el and written by actor Shia LaBeouf in a screenplay based on his life, Honey Boy is an often hard-to-watch and heartbreaking powerful drama about a toxic relationship between father and son that is a semi-autobiographical retelling of Shia LaBeouf’s own troubled life. The film revolves around a young actor named Otis, played by Noah Jupe as the 12-year-old version and Lucas Hedges as the 22-year- old version, at two different seminal moments of his life as a child actor in 1995 and later a drug- and alcohol-addicted popular actor in 2005. As the film’s timeline switches back and forth, the main thrust of the story is showing Otis as he relates to his recently sober yet very troubled father James, played by Shia LaBeouf in a revelatory performance, who serves as his chaperone on movie sets while they both live in a run-down Los Angeles motel. The movie is told from the perspective of the older Otis who is in a rehab program and is encouraged to write down his experiences as a child actor with his verbally abusive father. Otis serves as a stand-in for Shia LaBeouf who himself wrote the script during a stint in rehab after a fair share of amount of trouble with substance abuse and law enforcement. It is a very personal yet universal reflection on what fame can do to people, especially those who started as child actors, as well as how children are affected by their abusive parents for the rest of their lives. Overall, I found it to be a difficult movie to sit through but was important enough to merit viewing for its first-rate acting and deeply moving and introspective story written from the perspective of a troubled former child star like Shia LaBeouf.