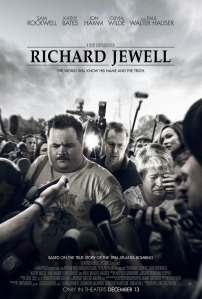 Directed by critically acclaimed actor and filmmaker Clint Eastwood who won the Oscar for Best Director for 1992’s Unforgiven and 2004’s Million Dollar Baby, Richard Jewell is a well-acted dramatic film that tells the true story of Richard Jewell who was a security guard wrongfully suspected as the perpetrator of the bombing at the 1996 Olympic Games in Atlanta. Richard Jewell, played by the terrific relative newcomer Paul Walter Hauser, is depicted as a quiet and somewhat awkward individual who always wanted to be involved in law enforcement but his aggressiveness prevents him from becoming a police officer or an FBI agent. Still living with his mother Bobi Jewell, played by the acclaimed Oscar winner Kathy Bates, Richard takes a job as a security guard in Atlanta protecting Centennial Park where concerts take place throughout the 1996 Summer Olympic Games and takes his job very seriously. His life is completely overturned on July 26th when he discovers a suspicious package under a park bench at Centennial Park during a concert with hundreds of people in attendance. Ultimately, it is revealed to be a pipe bomb that detonates resulting in the death of two people and over a hundred injuries. For the first few days, Richard is praised as a hero who saved many lives and thereby becomes a media darling. However, the fictionalized FBI agent Tom Shaw, played by Jon Hamm, is sexually coerced into telling a very aggressive journalist for the Atlanta Journal-Constitution newspaper named Kathy Scruggs, played by Olivia Wilde, that Richard fits the profile of the bomber. Eventually, word rapidly spreads across international news that this one-time hero Richard Jewell is now vilified as the bomber even though the FBI or local law enforcement have not charged him with any crime. The very respectful Richard wants to cooperate with authorities but feels so much pressure from the media and the FBI that he calls his former boss and now small-time lawyer Watson Bryant, played by Oscar winner Sam Rockwell. Watson is a very ambitious lawyer who strongly fights for his client Richard who is devastated along with his mother and tries to change the media narrative portraying Richard as the culprit. The acting performances give the movie a very real feel, especially from Kathy Bates and Paul Walter Hauser whose characters are seen as emotionally distressed victims of a smear campaign and have trouble coping with it since they are just regular people. The nightmare for Richard Jewell and his family goes on for several months as the FBI relentlessly interrogates Richard and comb through their apartment looking for evidence. The major problem with the film is Clint Eastwood’s overzealous depiction of the media and FBI as enemies of the people and even going so far as to fabricate a journalist offering sex for a tip even though it never even happened in real life. Granted, the media and authorities committed reckless actions that irreparably harmed Richard Jewell, but Eastwood sometimes goes too far to show the media and FBI as irreparable predators. Overall, I found it to be a compelling real-life drama that did a good job of recreating the 1996 Atlanta Olympic bombing and showing how it negatively impacted the true hero Richard Jewell; it was complete with first-rate acting performances but stumbled a few times in fairly portraying what really happened in regards to the media coverage and investigation.