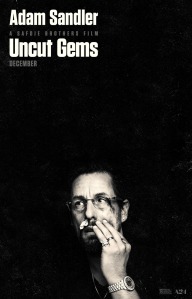 Co-written and directed by Josh and Benny Safdie best known for 2017’s Good Time starring Robert Pattinson, Uncut Gems is a fast-paced and thrilling drama about a jeweler in New York City who is spiraling out of control as a result of his gambling addiction and debts to dangerous loan sharks. Played by Adam Sandler in an Oscar-worthy performance, the Jewish Howard Ratner is in the middle of brokering his biggest jewelry sale after he acquires a very large uncut gem from Ethiopia and is desperate to sell it in order to pay off his large gambling debts. He owns a small jewelry shop in the frenetic New York City Diamond District and caters to famous clientele, including Boston Celtics basketball star Kevin Garnett, played by himself, who are brought to him by the well-connected Demany, played by Lakeith Stanfield. By following the very unlucky Howard over the course of several days, the filmmakers are brilliantly able to take the audience on a dizzying adrenaline-fueled chase through the city as Howard tries to survive one big misstep after another while on the run from his angry loan shark Arno, played by Eric Bogosian, and his thugs. What makes the movie work so well is the rapid-fire dialogue in which characters speak over one another as if in real life and the switching very quickly from shot to shot and edit to edit. It also feels authentic because it films in the actual Diamond District that is notoriously cautious of outsiders and shows the real gritty and fast-paced world of a very particular kind of jeweler whose lives and livelihoods depend on making deals on a daily basis. As he deals with his very deadly gambling debts and losing possession of the gem that he believes will turn his life around, Howard’s personal life is equally tumultuous as he balances time between his estranged wife Dinah, played by Tony winner Idina Menzel, and his much younger mistress Julia, played by Julia Fox. The unexpected brilliant performance given by Adam Sandler, who is known for juvenile comedies, terrifically illustrates how his character’s entire life is nothing but a series of gambles: there are bets that pay off and others that incur great debt to volatile individuals. Overall, I found it to be a non-stop and exhilarating one-of-a-kind cinematic experience that both entertains and leaves the audience on the edge of their seats; the hyperactive cinematography and filmmaking along with the believable and committed acting performances make for a brilliant movie.