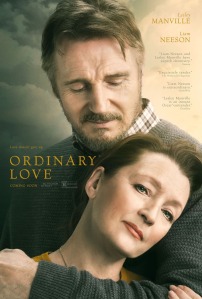 Directed by Northern Irish filmmakers and married couple Lisa Barros D’Sa and Glenn Leyburn, Ordinary Love is a heart-wrenching yet realistic drama that quite effectively portrays a rather ordinary couple dealing with an extraordinary situation and is anchored by the brilliant acting performances of acclaimed British actors Liam Neeson and Lesley Manville. The story is a fairly simple and straightforward one about a loving couple living in Northern Ireland who have been married for several decades and whose relationship is strained after the wife is diagnosed with breast cancer and has to go through brutal chemotherapy. Played by Oscar nominee Liam Neeson in a dramatic turn from recently starring in action movies, Tom has a beautiful relationship with his wife Joan, played by Oscar nominee Lesley Manville in a terrifically nuanced performance, but their quiet retired lives are upended after a scary medical diagnosis. As is the case in real life, Joan facing a breast cancer fight involving very painful chemotherapy treatments does not just afflict her but has a profound impact on her husband Tom who struggles with caring for his greatly suffering wife. The movie feels so heartbreakingly authentic because of the magnificent chemistry between the extremely talented actors who can easily be mistaken as an actual lifelong couple. Furthermore, the filmmakers make the excellent decision to depict rather precisely the medical tests and procedures that Joan must undergo as someone with breast cancer; it allows the audience to truly understand what a couple has to go through when one of them has cancer. Showing how difficult it can be for a very sick person to relate to their loved ones who is not actually going through the difficult treatments, Joan strikes up a friendship with a fellow cancer patient going through chemotherapy named Peter, played by Irish actor David Wilmot. Peter and Joan can candidly talk about their cancer more in depth and personally than they would otherwise be able to with their romantic partners. Overall, I found it to be a beautifully acted and detailed film that provides great insight into how cancer affects not just the patient but also the spouse or lover and how ordinary love is tested when faced with a great difficulty.