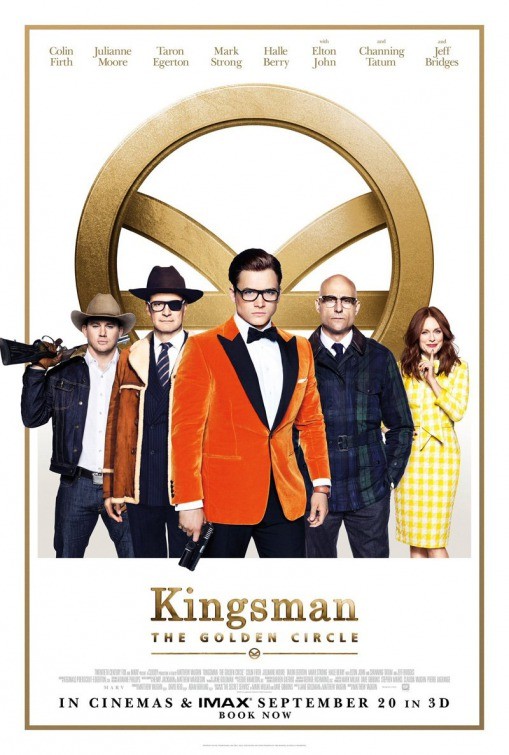 The sequel to the widely successful 2015 film Kingsman: The Secret Service from the director Matthew Vaughn, Kingsman: The Golden Circle is a crowd-pleasing action spy comedy that like its predecessor has an irreverent twist and is brimming with comically over-the-top violence. It takes place a year after the original and follows Eggsy, played by Taron Egerton, as a newly recruited member of the secret British intelligence agency known as Kingsman. Towards the beginning, he is still dealing with the loss of his mentor and fellow agent Galahad, played by Colin Firth, when the entire Kingsman organization is obliterated after missile strikes on its safehouses, including its London headquarters at a high-end tailor. Eggsy along with the only other surviving agent Merlin, played by Mark Strong, are confronted with a vengeful former recruit and a secretive criminal organization known as The Golden Circle. They must activate the so-called Doomsday protocol, which connects them with a similar secret American organization based out of a whiskey distillery in Kentucky called Statesman and led by Jeff Bridges’ character Champagne. Eggsy and Merlin must join forces with the very Western Statesman agents Whiskey, played by Channing Tatum, and Tequila, played by Pedro Pascal from the hit Netflix TV show Narcos, and are subsequently taken on a globe-trotting, shootout-filled mission to save millions. They are put into action after a previously unknown and extremely powerful drug trafficker named Poppy, played by Julianne Moore, has laced her illicit drugs with a deadly poison that will kill millions of drug users throughout the world unless the President of the United States agrees to legalize drugs at which point she will release the antidote. One of the more bizarre characters, Poppy is portrayed as ridiculously vicious and lives in a 1950s-themed headquarters in the jungles of Cambodia where she also has Elton John held captive. Eggsy learns that no one can be truly trusted and must also please and protect his beautiful girlfriend who happens to be the Crown Princess of Sweden during some particularly inappropriate missions. Overall, I found it to be an entertaining movie that contains some of the same elements of fun and thrills as the original, but, unfortunately, falls short of the first film’s originality and hilarity and is hampered by its bloated two and a half hour runtime.