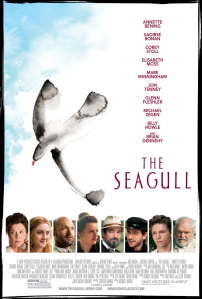 Based on the famous play of the same name written by Russian playwright Anton Chekhov in 1895, The Seagull is a suitably well-done prestige drama that attempts to retell the acclaimed theatrical production in a more cinematic fashion and is remarkable for its tour de force cast. Set in the idyllic Russian countryside in the early 20th century, the story revolves around the complicated relationships between the house guests at the vacation home of a famous aging and self-centered actress named Irina, played by Academy Award nominee Annette Bening, and her ailing brother played by Golden Globe winner Brian Dennehy. Irina’s son Konstantin, played by Billy Howle, is an aspiring writer who becomes jealous of his mother’s younger famous author boyfriend Boris, played by Corey Stoll. Over the course of the movie, things get even more complicated with the presence of several love triangles involving the characters. Konstantin is in a relationship with the beautiful neighbor Nina, played by Academy Award nominee Saoirse Ronan, who falls in love with the brilliant Boris who encourages her to pursue her dream of acting in Moscow. Unbeknownst to Konstantin, the household caretaker’s daughter Masha, played by Golden Globe winner Elisabeth Moss, is in love with Konstantin while she is loved by the local school teacher. The plot very much reminds me of a English country house party drama written by Jane Austen but with obvious Russian elements of a tragicomedy in which there is a lot of witty conversations between characters and several of the characters’ stories end in tragedy. Overall, I thought the filmmaker did a good job of transforming such an important play into an admirable work of fiction that would work on the big screen, and it is definitely helped by a stellar cast; however, the audience can come away with the feeling that many of the talented actors were simply on board because it is an Anton Chekhov adaptation.