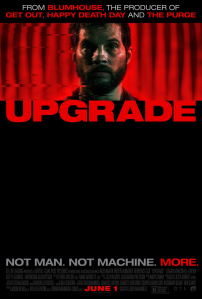 Produced by Jason Blum who is best known for horror films and the Academy Award-nominated Whiplash released in 2014 and Get Out released in 2017, Upgrade is a surprisingly fun and exhilarating low-budget sci-fi film that has a uniquely creative script filled with tongue-in-cheek humor and gruesomely violent action sequences. Played by television actor Logan Marshall-Green, Grey Trace is living a peaceful life as a stay-at-home husband who enjoys working on classic cars and is happily married to the beautiful Asha until tragedy strikes after he and his wife are viciously attacked, which leaves him paralyzed. Depressed over his condition and the loss of his wife, Grey agrees to participate in a secret futuristic experiment offered by tech mogul Eron Keen, played by the creepy Australian actor Harrison Gilbertson, that has the ability to restore his body functions to normal. Eron has developed a technological device called STEM that when implanted gives the person super strength and increased awareness by bridging its advanced technology with the human body. Grey uses his new abilities to track down and brutally hunt those responsible for his wife’s death after the police investigation led by Detective Cortez, played by Betty Gabriel best known for her role in Get Out, appears to go nowhere. Eventually, he learns that STEM can talk to him and ultimately take complete control of his body even against his will. Reminiscent of the filmmaker’s other work, especially the Saw film series first released in 2004, the fight scenes are extremely graphic but are choreographed like some sort of robotic dance in which Grey is viciously able to dispatch his opponents. As the body count rises, he discovers that there is a dark and mysterious conspiracy that motivated the initial attack that left him paralyzed. Furthermore, the twist ending makes for even more of a thrill ride that was unexpected from the beginning. Overall, I found it to be a thoroughly entertaining action sci-fi flick that feels like a midnight B movie while also being a smart movie that explores the implications of technology and surveillance.