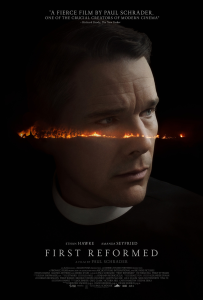 Written and directed by Golden Globe-nominated screenwriter Paul Schrader who is best known for 1976’s Taxi Driver, 1980’s Raging Bull, and 1988’s The Last Temptation of Christ, First Reformed is a first-rate drama exploring the complexities of religion, environmental issues, and self-reflection and is truly remarkable for the Oscar-worthy performance of Ethan Hawke. The plot follows the troubled Reverend Ernst Toller, played by Oscar nominee Ethan Hawke in perhaps his best role, who leads a very small congregation at an upstate New York Dutch Reform church that is about to celebrate its 250th anniversary. Struggling with alcoholism and past trauma, he finds little solace in his pastoral work and lives a lonely existence without practically any friends or family. His somber and quiet life changes course after meeting a pregnant parishioner named Mary, played by the terrific Amanda Seyfried, and her distraught husband who is an extremist environmental activist. While trying to navigate religious issues with Mary and her husband and coming to terms with the environment, the Reverend is under the guidance of his mother megachurch Abundant Life led by the influential Pastor Jeffers, played by Cedric the Entertainer in a very dramatic role, who has financial ties to the region’s largest polluter. The beautifully dark cinematography with a smaller aspect ratio and set during the depths of winter brilliantly underscores Reverend Toller’s quiet despair grappling with his own demons and conscience about the church’s involvement with what he sees as an immoral corporation. In the gripping climax towards the end of the movie, he contemplates committing a grievous act out of desperation and as his own form of environmental activism. Overall, I can say without any doubt that it is one of the best films of the year and Ethan Hawke’s mesmerizing acting should be universally applauded; therefore, I highly recommend the movie to true lovers of cinema.