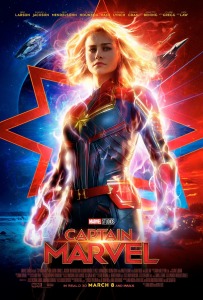 The twenty-first installment of the Marvel Cinematic Universe movie franchise, Captain Marvel is your fairly typical superhero comic book movie but is elevated by above-average acting performances and a script filled with humor and female empowerment. The story revolves around Vers, played by Oscar winner Brie Larson, who is a member of the Starforce tasked with protecting their own alien race known as the Kree. Her commander and mentor Yon-Rogg, played by Oscar nominee Jude Law, trains her to control her superpower of having a powerful energy force that can be used as a very destructive weapon. They are in the midst of a war with another alien race known as the Skrulls who can shape-shift into any life-form and are led by Talos, played by Golden Globe winner Ben Mendelsohn. Eventually, Larson’s character finds herself on Earth in 1995 after she is captured by the Skrulls. She is discovered by bewildered agents of the secret American agency known as S.H.I.E.L.D., including Nick Fury who is played by Oscar nominee Samuel L. Jackson. He is teamed up with Larson’s character whose Earth name is Carol Danvers and thereby is ordered to keep eyes on her by the agency’s director Keller, also played by Ben Mendelsohn. Over the course of the storyline, not everything is as straightforward as first presented at the beginning, and it does not become entirely clear who the real enemy is and the true motivations of the characters. Things get increasingly complicated for Danvers after discovering she was connected to a secret United States Air Force program known as Project Pegasus run by a woman that Danvers previously forgot about as a result of amnesia, Dr. Wendy Lawson who is played by Oscar nominee Annette Bening. Par for the course with such a blockbuster, the film is filled with CGI-enhanced action sequences and cross references with the other movies in the Marvel Cinematic Universe. Similar to the Guardians of the Galaxy movies, the film does have moments of humor, especially the scenes involving the cat Goose who is seemingly always around for no apparent reason. Overall, I found it to be yet another entertaining blockbuster in the ever-expanding Marvel Cinematic Universe that provides just enough levity to not take itself too seriously while also presenting a powerful female superhero, in the same vein of the inspiring 2017 movie Wonder Woman.