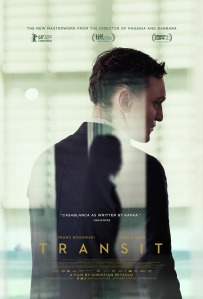 Directed by critically acclaimed German filmmaker Christian Petzold best known for 2014’s Phoenix, Transit is a powerful dramatic film with a very unique and creative adaptation of a 1944 novel set in German-occupied France during World War II. Instead of the setting being World War II, the filmmaker makes the clever decision to have the story of a man trying to escape from a fascist regime take place in modern-day France. The sometimes rather unusual movie follows a German living in oppressive France named Georg, played by terrific German actor Franz Rogowski, who is desperately trying to flee the country for a better life in either the United States or Mexico. Much of the plot revolves around him trying to obtain a visa and transit papers to leave the port city of Marseille and travel by ship to a free country. He pretends to be a famous revolutionary writer named Weidel who has already obtained the proper paperwork to leave France but has just committed suicide. Eventually, he gets to know the writer’s widow Marie, played by German actress Paula Beer, who is also trying to leave the country but is searching for her husband who she does not know is dead. Over the course of getting to know each other, Georg and Marie begin to fall in love with each other, which complicates her search for her husband. Georg also befriends a young boy named Driss who is the son of one of his deceased friends. Along the way, we meet a same group of refugees meeting in bars, restaurants, and embassies hoping also to escape fascism. In addition to the twist on the setting, the movie also has a mysterious narrator who occasionally gives random narration about things that are not entirely clear. Overall, I found it to be a very intriguing foreign language film that is able to capture the fears of today surrounding nationalism by taking a World War II story and making it contemporary.