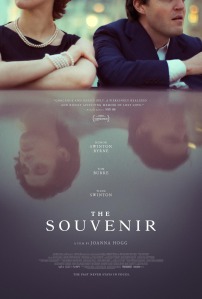 Written and directed by critically acclaimed British independent filmmaker Joanna Hogg known for making movies that partly reflect her own life, The Souvenir is a very artsy indie film about a budding film student who enters into a troubled relationship with a slightly older man, and it is remarkable for the terrific acting performances and the unique filmmaking techniques and writing. A slow burn of a movie, the almost philosophical movie revolves around the main character Julie, played by the talented young newcomer Honor Swinton Byrne who is the daughter of Oscar winner Tilda Swinton, who tries to distance herself from her upper middle-class family, including her mother played by Tilda Swinton, by joining a small film school and obsessing over making a movie with a very vague topic. Eventually, she begins a romantic relationship with the mysterious and quintessentially posh Anthony, played by the mesmerizing English actor Tom Burke, who is in a constantly dark place and is revealed to have some serious addiction problems. Similar to Julie, he very much goes against what is expected of him, and it is rather a surprise to learn that his family is from a working class and laid-back background. Often, the film feels like a personal project that is a very meta exploration of filmmaking, romance, class status, and toxic relationships. Yes, it can be a difficult-to-watch and confusing movie, but somehow it leaves a deep impression upon the viewer and reveals itself to be more like a piece of artwork that should be cherished for its complexity and beauty. Overall, I found it to be one of those rare films that I did not initially know whether I liked it or not; it was only after watching the movie did I realize how much it affected me. Only now do I appreciate it as one the best movies of the year as a result of how the filmmaker and actors were able to craft such a superb cinematic experience from an occasionally frustratingly opaque story.