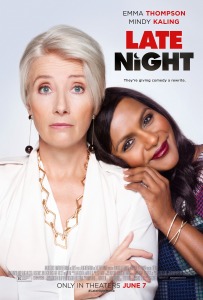 Directed by Nisha Ganatra best known for her work on the award-winning TV show Transparent and written by Mindy Kaling best known for her hit TV show The Mindy Project, Late Night is a terrifically entertaining comedy about a fictional late night comedy show like The Tonight Show hosted by the only female in the industry and is remarkable for its first-rate acting performances, especially from the always terrific Emma Thompson. The story revolves around the late night comedian host Katherine Newbury, played by Oscar winner Emma Thompson, whose long-running show on a major television network is struggling in the ratings as it becomes increasingly irrelevant in today’s fast-paced news cycle and social media influence. In a last-ditch hope of revitalizing the show, the producers and network force Katherine to make a diversity hire by hiring its first female writer who happens to have no professional comedy experience but is very energetic. Although the male-dominated writer’s room and the very stubborn and demanding Katherine does not like the new hire and her new ideas at first, the Indian-American writer Molly Patel, played by comedian and actress Mindy Kaling, slowly becomes friends with Katherine and helps the show rebuild with her fresh views of comedy. Katherine becomes more receptive to Molly as her personal life begins to fall apart, especially with her rapidly ailing husband who is played by Oscar-nominated actor John Lithgow. Even more pressure is added when the head of the network, played by Oscar-nominated actress Amy Ryan, threatens to replace the well-respected veteran host Katherine Newbury with a younger male comedian whose comedy is edgier to appeal to larger audiences. What I particularly liked about the film is its behind-the-scenes look at what happens on a daily basis in the offices of a late night TV show and even brings in the real late night host Seth Meyers for a cameo to create a level of authenticity about the industry. Overall, I found it to be a highly entertaining film about comedy that itself is very funny and relies on a highly talented cast to effectively illustrate what happens on the set of late night television and what it must be like if there was a major female host.