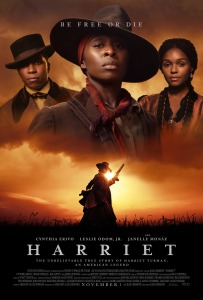 Directed by critically acclaimed African American filmmaker Kasi Lemmons best known for 1997’s Eve’s Bayou, Harriet is important as the first major motion picture about runaway slave and abolitionist Harriet Tubman that tells a truly remarkable story but does not do justice to such an extraordinary person as a result of the film’s rather formulaic script. Based on a true story, the plot follows Harriet Tubman, played by Tony winner Cynthia Erivo, first living as a slave in Maryland who decides, after receiving visions from God, that she must escape and run away to the free state of Pennsylvania. We witness her courageous solo journey of over 100 miles being chased by slave catchers led by her brutal slave owner Gideon, played by Joe Alwyn. Eventually, she makes it to Philadelphia where she gets help from an African American abolitionist leader named William Still, played by Leslie Odom Jr., and a generous African American boarding house owner named Marie, played by Janelle Monáe. Receiving further visions, she makes the brave decision to return to Maryland to help her family also escape slavery using the Underground Railroad route given to her by Still. The rest of the film follows her numerous other expeditions as one of the most successful conductors on the Underground Railroad to eventually help almost 300 slaves escape to freedom. Following the tropes of the adventure genre, Harriet is constantly chased by the villain in the form of Gideon and his slave catchers, including an African American man, but she always perseveres to help her fellow man, woman, and child to reach freedom. Her missions are very much complicated by the passage of the Fugitive Slave Act, which allowed runaway slaves living in free states to be legally captured and returned to their slave owners in the South. Overall, I found it to be a much-needed and thereby very important depiction of one of America’s greatest heroes who has been overlooked in terms of the embarrassing lack of cinematic treatments. Despite the terrific acting performances and amazing story, the movie, unfortunately, adheres too much to a typical action adventure film with predictable actions and results and makes for a movie that does not rise to the stature of the truly extraordinary Harriet Tubman.