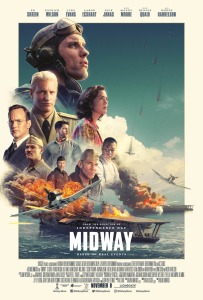 Directed by Roland Emmerich who is best known for such Hollywood Blockbusters as 1996’s Independence Day and 2000’s The Patriot, Midway is a large-scale war action movie that heavily relies on CGI special effects to recreate the pivotal Battle of Midway during World War II but does not fully satisfy as a well-rounded movie as a result of its fairly generic script and characters. Based on true events of the beginning of the American involvement in World War II, the movie shows the devastating surprise attack on the United States Pacific Fleet at Pearl Harbor in Hawaii by the Empire of Japan. The plot follows a bunch of American characters from the top with the Commander-in-chief of the U.S. Pacific Fleet Admiral Chester Nimitz, played by Woody Harrelson, to the top intelligence officer in the region Edwin Layton, played by Patrick Wilson, and all the way down to the Naval bomber and fighter pilots, including the real life Dick Best who is played by Ed Skrein and Wade McClusky who is played by Luke Evans. Also, unlike most traditional war movies, the film also follows several key Japanese Naval commanders and officers who are shown making battle decisions based on their best interest. After the somewhat haphazard introduction to almost too many characters to keep count, the story leads up to June 4, 1942 when the Japanese engage the American military at and around the remote islands of the Midway Atoll, a strategic base that allows for closer range to the Japanese Islands. What ensues is the Battle of Midway in which American aircraft carriers and their warplanes go up against the Japanese counterparts in what would become the one of the largest naval battles of World War II. In dramatic and spectacular fashion, the movie effectively uses special effects to capture what the battle must have been like with a constant flurry of aircraft and anti-aircraft fire on both sides. The main mission of the Americans is to destroy as many of the Japanese aircraft carriers as possible in order to recapture control of the Pacific Theater after the mass destruction of the United States Pacific Fleet at Pearl Harbor. The script also does scratch the surface of the personal lives of those involved, especially the Naval pilots, but is ineffective because it comes off as cheesy and formulaic, making for unnecessary storylines to the main thrust of the movie to portray a specific battle. Overall, I found it to be a suitably entertaining war movie that does a good job of using special effects to fashion realistic and thrilling battle sequences in order to tell the important story of the Battle of Midway, but, as a whole, relies on too many characters and a rather average screenplay to truly become an iconic war movie.